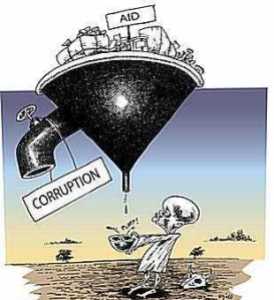 Foreign aid programmes have been criticised for encouraging dependency and wastefulness amongst developing countries. All too often there is little to show for the spending that has eventuated in these countries. Furthermore there seems to be a mismatch between what donors are prepared to pay for and what recipient countries feel is a priority. Money, in a lot of circumstances, is given to firms who have close links with the government but the end product is not used e.g. schools, roads and other infrastructure. Although donors can be stringent at how the money is spent, it is very difficult to monitor commercial activities in the developing world. For example “The Economist” reported that laying a square meter of road costs the World Bank 50% more in countries where firms report paying bribes above 2% of the value of contracts than ones where such payments are reported to be lower.

In order to combat this donors are now looking at giving aid only if outcomes improve – “Cash on Delivery”. Under this system recipients decide what they would like to develop in their economy and starts to use its own money and existing aid. This has also been referred to as the Stick and Carrot approach.

Coarse Theorem – Ronald Coarse argued that bargaining between parties could produce a mutually beneficial and efficient solution to problems like pollution.

Norway and Liberia
An example of this was the a deal between Liberia and Norway. Norway will give $150m in aid in return for Liberia stopping the destruction of its forests. The stick approach of trying to force Liberia to stop cutting down its trees might give way to a more effective carrot approach by paying Liberia to do so. This makes both sides better off. Liberia still gets the aid and Norway gets to preserve biodiversity and take a small step against climate change.

UK and Ethiopia
The UK has agreed to pay Ethiopia up to US$157 for each extra pupil sitting its school-leaving exam, compared with numbers before then, and another US$157 for each pupil who passed. Two years later nearly 45,000 extra students have taken the exam and 42,000 extra have passed.

I suppose now the onus is on the recipient country to avoid failing which has been the case with some conventional aid programmes where it is easy to proclaim assets as accomplishment.